I had no intention of blogging today.  Heck, I wasn't even gonna make dinner tonight.  The hubby is out of town so I had planned on coming home and eating whatever.  That did not happen.  Let me explain...I work with someone who is as obsessed with vegan food as I am.   We talk about vegan food ALL day long.  She(Tatiana) has not committed to being 100% vegan but she enjoys eating all the vegan foods that I make and she even makes some herself.  She also comes with me to my favorite vegan restaurant (Everlasting Life Cafe) every weekend.  With that said, I mentioned to her that I was going to make Happy Herbivore mock tuna salad(page 113) sometime this week.  My only problem was that I had used the last of my vegan mayonnaise and the store where I get it is not on my way home.  Tatiana said, "I have vegan mayonnaise at home and I will bring to you after work".  So, that is what she did.  Still, I wasn't going to blog about it until this weekend...that is until I made it and tasted it.  In a word, scrumptious!!! 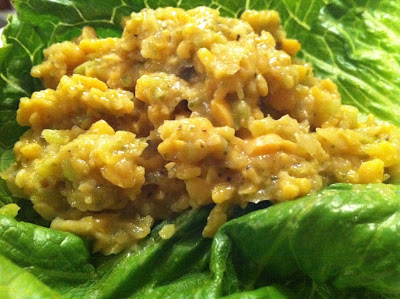 I followed the recipe exactly as she said, even down to the kelp powder. (I'm still wondering why the heck did I have kelp powder in my pantry).   I've read about this recipe, mostly on Twitter.  I should have known that it was going to be tasty and it did not disappoint.  I mixed it in the bowl and tasted it.  One taste led to another taste and another taste and before I realized it I was standing over the mixing bowl eating my dinner...Oh no!  I told Tatiana I would bring her some since she did donate the vegan mayo, and what about the photo for the blog...OK, so I put down the spoon and walked away, but not before taking the above photo(which I also ate) and putting the rest in a bowl for my friend.  6 recipes down!!!

Make it With Love!!!