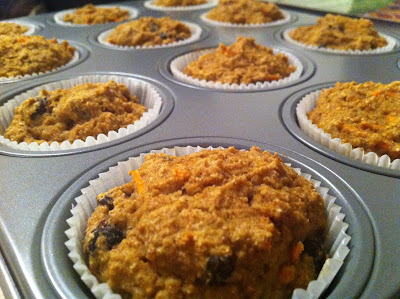 My hubby has an incredible sweet tooth, and with this adventure it is my goal to always have something sweet and healthy, in addition to vegan, in the house for him to munch on.  These muffins fit the bill.  They were moist and fulfilling and they achieved that goal.  Hubby enjoyed them. (Note to self:  shred the carrots more...I thought that the carrots were too big but no one else complained). 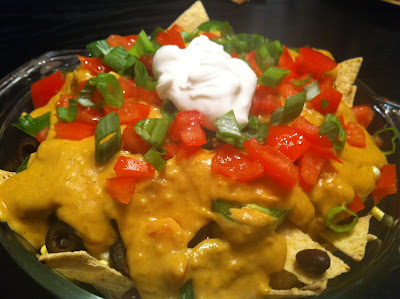 Well, what can I say??  The picture says it all.  And I thought loaded nachos where no longer a part of my life since becoming vegan.  But, I was wrong.  And the Nacho Cheese Sauce(page 265)...oh so cheesy!!!!  Now, to stay true to the raw girl that I am I added raw sweet corn instead of the frozen version.  In a word...marvelous!!!! (The dollop of sour cream was a vegan store bought version) Hubby approved and my non-vegan daughter loved them.

Next up, for breakfast on Saturday I made the French Toast(page 24)... 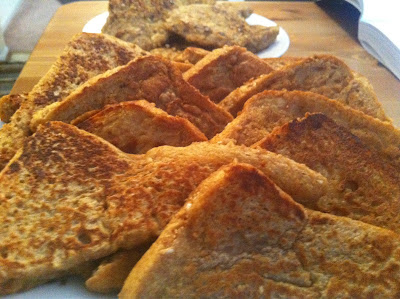 Following the recipe exactly...surprise again!!! This french toast was amazing.  I'm assuming it was the chickpea flower that made it taste like the non vegan version of french toast.  The first couple of slices where a little messy, the recipes states to let it cook for 3 minutes...very important step.  After I read that again, the rest cooked perfectly. (Notice in the background the breakfast sausage).  Hubby approved and the daughter was surprised by how appetizing this french toast was. 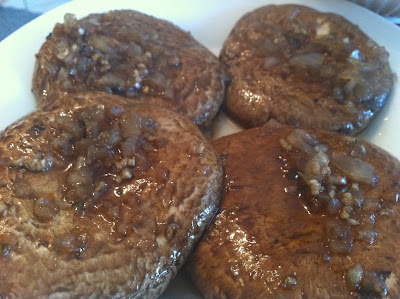 Started out by making the Portabella Steaks(page 148).  This dish had the house smelling wonderful with hints of garlic and onions...then I put the chickpeas in the oven for the tacos... 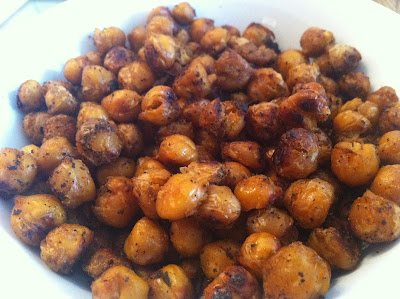 The flavor of these peas could definitely stand alone...They would make a great snack all by themselves...Followed both recipes exactly and the end results were awesome.  Had the BFF over for this dinner and she agreed... 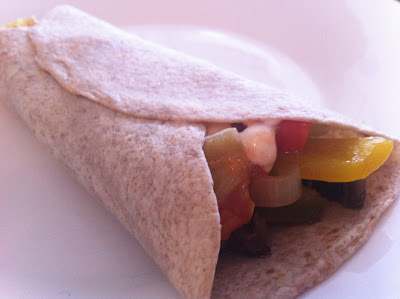 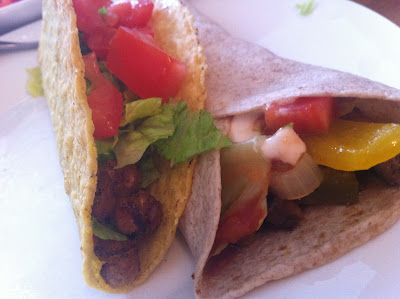 Kinda hard to take a picture of a taco, so I leaned it against the fajita.  Looks a little blurry too...but they still look awesome!  Again Hubby and daughter approved!!!

Wanting to end the meal with something sweet, I decided on the Scones(page 54)...I made the chocolate chip version.  Before I show the picture I am going to say that they were very tastey.  My BFF and her 7 year old god-daughter along with my Hubby enjoyed them.    The reason for the following disclaimer is that I must have done something wrong...I looked at my scones, then looked at the picture in the cookbook, then looked at my scones again and thought...what did I do wrong???  They looked more like muffin tops.  Here's the photo... 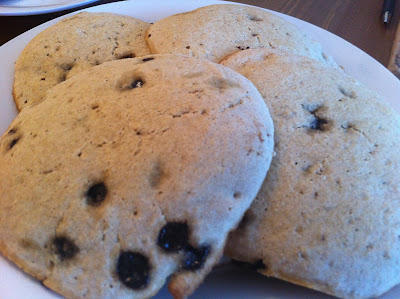 what do you think I did wrong??? 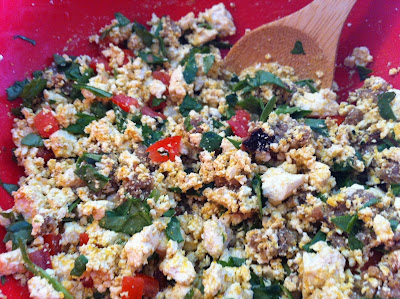 Frittata before the oven 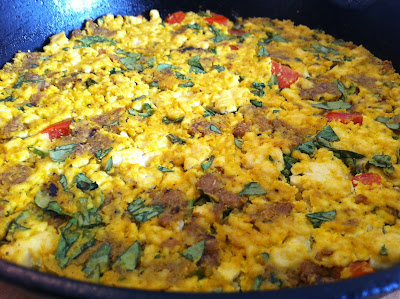 finished Frittata...looks amazing
This dish was burtsting with flavor...I followed the recipe exactly, adding fresh spinach and fresh tomatoes along with the leftover breakfast sausage from yesterday(crumbled).   If I didn't know that this was tofu, I would have thought I was eating eggs...so far my favorite breakfast dish! 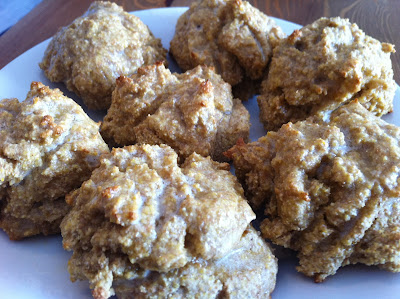 Maple-Cornbread Biscuits...Followed the recipe exactly.  Interesting combination that works very well together...The maple taste adds just the right amount of sweetness and the cornmeal gives the biscuits a texture that you don't expect but you will thoroughly enjoy.   I added a little Earth Balance to them as soon as they came out of the oven...Heavenly! 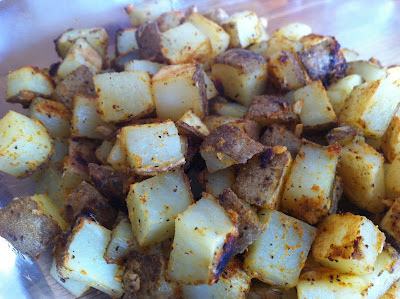 The Cajun Home Fries were well seasoned and savory.  Following the recipe exactly made the perfect mix of garlic, onion and cajun seasonings.   I will add more cayenne pepper next time to make them just a bit more spicy. 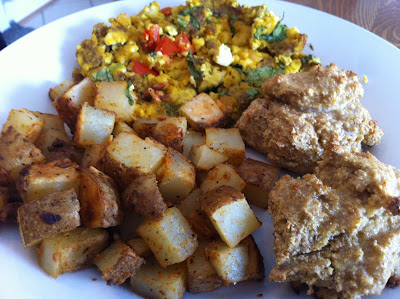 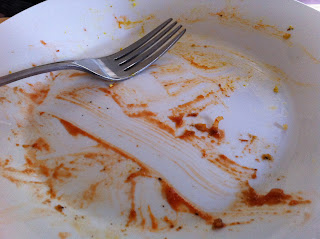 and Hubby's plate after :)

Now, to finish out this weekend with a bang...For the past two weeks on Twitter I've seen pictures of and read all the rave reviews of the Happy Herbivore  Fettuccine Alfredo(page 163).   I made my mind up that I would be making this today and that's what I did... 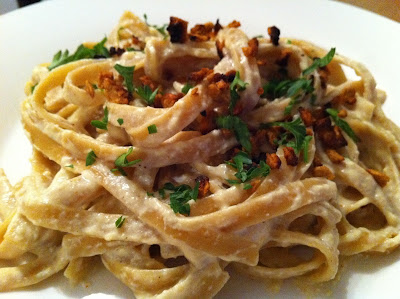 Now I see what all the fuss is about.  This dish was delectable.  I followed the recipe exactly creating a creamy, cheese flavored dish. Good thing I ate my dessert before I ate my dinner.  I definitely would've had seconds.   Notice the Bacon Bits(page 137) and parsley atop the fettuccine.    Now, what was for dessert you say???? 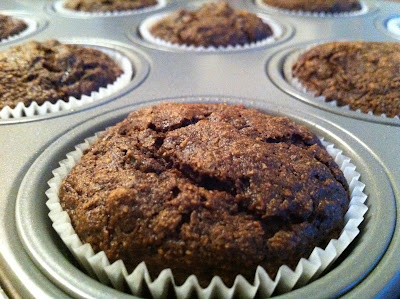 Chocolate-Zucchini Muffins(page 45).  Following the recipe exactly and added the optional vegan chocolate chips.  When I had Hubby taste he said, "Wow".  When I tasted I said, "Wow".  Moist and overflowing with chocolatey goodness.  Hard to believe that there's one cup of shredded zucchini in these muffins.

19 recipes down...
Remember to Make it With Love!