I have never, ever, ever eaten an entire beet in my life...until now.  I actually love them...RAW that is.  I went to one of my favorite restaurants Great Sage and had what I always have,  Raw California Rolls. 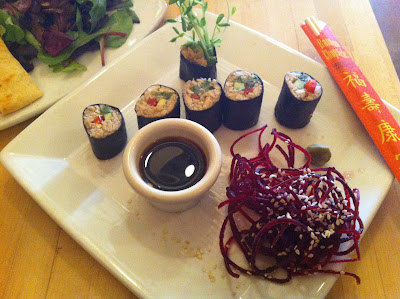 You see that curly stuff on the right side, well those are raw beets.  I tasted them and they were not bad.  So I thought to myself...wonder how they would taste marinated in olive oil and seasoned.  I have seen pictures of beet ravioli but actually never thought that I would try it because like I said earlier...I do not like beets.  I guess that beets are like carrots to me, because I don't like cooked carrots either.
I was excited and eager to give this recipe a try.  Went to the grocery store, bought a beet.  Only bought one because I was still a little skeptical.  Not totally convinced that beets where my thing.
Did a little research on marinating and creating with raw beets.  Used my mandoline to slice the beets and marinated them in olive oil, sea salt and pepper.
After cleaning the mess that beets cause, everything was beet red, including my hands, the sink and my mandoline. I created beet ravioli... 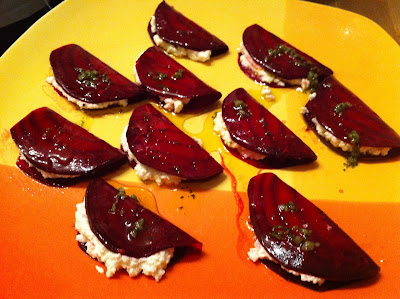 And it was delicious!!! Hubby liked them and my friend, Diane enjoyed them as well.  They are stuffed with Macadamia Ricotta which is listed in the recipes on my blog.
I am surprised by my love of these beets.  Just more proof that cooking food not only changes the nutritional value but it also changes the taste!  GoRAW!