Yesterday was Vegan Pizza Day.  I was pretty excited about this day to say the least.  I have only had pizza once since my vegan/raw journey began and it was a raw pizza which I loved.  When I found out that is was vegan pizza day I started looking for places that served it around me.  Since I have incorporated some cooked foods into my diet I thought I would give a cooked pizza a try.  After much research I decided to go to ZPizza.  Also did a little research as to what they did to made the pizza "vegan".  Since I have become vegan I am very aware of what I am putting in my body as we all should be.  One thing that I have never eaten is vegan cheese which is what they use to make it vegan,  in addition to the vegetables and organic tomato sauce.  They also have a gluten free crust.  Did a little research on the cheese that they use.  It's a dairy free cheese called "Daiya Vegan Cheese.  I was very excited and looking forward to try this pizza.  Have not had cheese of any kind since October 2010. 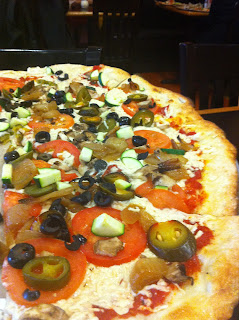 This is my pizza...tomatoes, olives, zucchini, jalapenos, caramelized onions, and mushrooms.  I must say that after eating this pizza I don't think that I really miss cheese at all.  I can definitely see how someone who loves cheese would love this cheese.  It is probably the best Vegan Cheese out there.  I know that my taste buds have changed because I felt that the cheese took away from the taste of the veggies.   Bottom line is that I don't miss cheese but it is good to know that there is a vegan cheese out there that actually melts and taste like cheese.  They have two kinds, cheddar and mozzarella.  Notice that it is a little pricey. 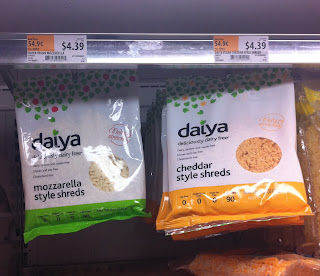 I thoroughly enjoyed this Vegan Pizza Day and will participate again next year.  Maybe by then I will have a favorite pizza place or I will have perfected my own "vegan pizza".
Posted by Veronica Lynne at Sunday, January 30, 2011